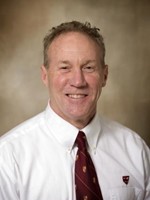 St. Lawrence University promoted Bob Durocher to the position of Director of Athletics and Recreation in the spring of 2015. An assistant athletic director at St. Lawrence since 2000 and a highly successful men’s soccer coach since 1990, he replaces Margaret F. Strait who served in the position from 1997 to January 2015.

In 2010, University President William L. Fox elevated the position, more commonly known in the industry as athletics director, to be a senior staff advisor reporting directly to the president. Durocher will oversee strategic leadership of all sports programs, staff and facilities of the Athletics Department, which includes 83 employees. Additionally, he will serve as chair of the University’s sports studies and exercise science minor.

Durocher became the third men’s soccer coach in St. Lawrence University history in 1990 and established the Saints as one of the premiere programs in the nation. In 1999, his Saints became the first team in NCAA Division III history to go undefeated and untied en route to the program’s first national championship and Durocher was named NSCAA Division III Coach of the Year for his efforts. In total, the Saints made 17 appearances in the NCAA Tournament under Coach Durocher, including nine straight from 1998-2006. He completes his SLU soccer coaching career with a  323-101-45 record.

The Saints have captured 17 conference titles with Durocher at the helm of the program and also won the ECAC Northeast Championship in 1997. He has produced 87 regional All-Americas and 22 national All-America players during his tenure, including a National Player of the Year in Danny Annan, Jr. in 1999.

A native of Canton and a three-sport high school athlete, Durocher was a two-year captain, a four-year starter and an all-conference player at Ithaca College. He began his coaching career at Canton College as its women’s coach and took that team to the NJCAA Tournament. He then moved to Florida where he was a player and an assistant coach in a USASA league before returning to the North Country as an assistant coach for both the men’s and women’s teams at St. Lawrence in 1989.

Past chair of the NCAA Regional Selection Committee and a member of the ECAC Selection Committee and the NSCAA/ISAA Rating Board, Durocher has also been director of the St. Lawrence fitness facility. He is active in the promotion of youth soccer in the Canton area.  He and his wife Robin, the director of St. Lawrence’s Stafford Fitness Center, reside in Canton and have three children: Ryan, Danielle, and Trent.