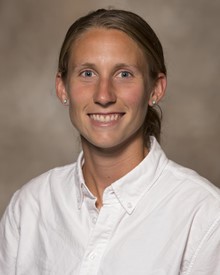 Jordan May joined the St. Lawrence women’s soccer staff in the summer of 2016 as an assistant coach. An experienced coach at the collegiate, high school and club levels, May joins the Saints after serving as an assistant at Bates College for the past three seasons, where she helped lead the Bobcats to the NESCAC Tournament under conference Coach of the Year Kelsey Ross. She also helped to established youth clinics and coordinated the team’s community engagement during her tenure at Bates. In addition, she has coached with Seacoast United Soccer Club, Real Salt Lake Youth Soccer Camps and the GPS Maine Portland Phoenix Elite U17 Girls team. May was also the head junior varsity and assistant varsity coach at Hidden Valley High School in Roanoke, Va. during her senior year in college and was a strength and conditioning intern at Elkin Sports Performance, also in Roanoke. May graduated from Roanoke College in 2013 with a degree in Health and Exercise Science and was a four-year member of the women’s soccer team. She served as a senior co-captain and was the recipient of the Old Dominion Athletic Conference’s Sportsmanship Award in both 2010 and 2012. She was also a member of the Maroons’ Student-Athlete Advisory Committee (SAAC). Jordan returns for her second season as a FC Freeze Staff coach.